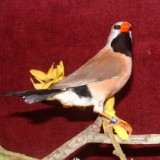 The Shaft-tail Finch – by Kerri McCoy

The Heck’s Grassfinch or Shaftail, as it is also called, is an elegant Australian finch with a rather comical demeanor. Don’t let their size of 6-7 inches fool you; they are peaceful birds that can be housed with any other finches of similar demeanor. The only problem that may arise with housing Heck’s with others species is their inquisitive nature. They may tend to be too nosy of other’s nest boxes. I myself have not had a problem housing them with other peaceful species. Their comical nature makes them my most favorite of all the Australian finches, save the zebras. As they fly from perch to perch they bob their heads up and down upon landing. This gesture never stops from creating a laugh from anyone observing them.

The Heck’s has been touted as Australia’s most elegant finch. Being slender and sleek with a smooth, sharp color pattern there is no reason to wonder why. Beak color ranges from bright orange to deep red depending on the color mutation. Heck’s colors range from the normal as described below to cremes, whites, and fawns. The head of a normal is a beautiful soft gray with black streaks around the eyes giving it an almost oriental appearance. Below the beak and running down to the top of the chest is a bold black bib. The body itself is a soft grayish brown with almost a tinge of peach. The underparts of the Heck’s is yet paler and the vent area is almost white. The tail is black and quite long separating into two central shafts. A broad black bar extends down each side of the legs and is flanked with brilliant white. The legs are orange/red in color, depending on the mutation.

Sexing of the Heck’s can prove difficult to the uneducated eye. Although seeing a male and female beside one another resting on a perch, the sexing is quite easy. The male’s bib is quite wider than the females.

Although if you were to catch them up the bib size changes as the bird moves it’s neck. One cannot sex Heck’s only on bib size. There are many in between bib sizes that makes sexing visually, almost impossible. The beak of the male’s is usually slightly larger than the females; the head of the female is usually darker; and the black stripes along the leg area can also be larger and bolder in males. But, to surely distinguish the sexes one must wait for the male to sing a trifling song. While singing his neck area will also extend somewhat making watching for the males a little easier.

My experience with the Heck’s is that they love mealworms with a passion. Limiting them to 1 or 2 each 2x a day is best. Feeding mealworms and an eggfood (rearing food), helps put them in the breeding mood. They will usually choose a box nest over a rattan style nest and are quite elaborate in their nest building. They tend to use more nesting material than any other species I have encountered. Mine take a half open nest box and completely cover the opening making just a small tunnel for entrancing and exiting. They love long pieces of grass, preferable in 8 inch lengths.

Once the nest has been made to their satisfaction the female will begin laying. Clutch sizes range from 4 to 6 and incubation is usually 13 to 17 days.

Heck’s do not begin incubation until all the eggs are laid. Heck’s are extremely diligent parents. They raise their young with the same passion as do zebras. The young will usually fledge in 18 to 23 days. They emerge as dull gray replicas of their parents. The fledglings beaks and legs are black until the orange/red coloring fills in.

I normally leave the young with their parents for 35-45 days. I have found that moving them sooner, even though they are exhibiting self-feeding, can present a problem. I have read in many places that Heck’s do not tolerate nest inspections. I have not found this to be the case. I have encountered no problems with banding the young or occasionally checking the nest. It is usually best to do this when both parents are out of the nest. My females tend to stay put when I want to get a peek inside and don’t scare off easily. If you happen to move the nesting material around during nest inspection the parents will let you know that they did not approve. They immediately “fix” anything that is out of place.

I would not recommend housing Heck’s in small cages. They are graceful, fast flyers and should one escape, catching them can prove quite time consuming. Housing Heck’s in flights around 6 ft in length is best for these beautiful birds to show off their flying skills.

I would recommend Heck’s to any finch fancier, whether a beginner or an experienced breeder. Anyone who chooses to add these birds to their collection will be most pleased. They may even capture your heart, as they certainly have done with mine.

(No part of this publication may be reproduced in any way without prior permission from the author.)

This site uses Akismet to reduce spam. Learn how your comment data is processed.