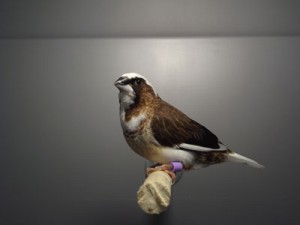 The Bengalese or Society Finch (Lonchura striata) is a domesticated form of the Sharp-tailed Munia and does not appear in the wild. They occur in many color mutations and are often used as foster parents for other finches that may refuse to look after their own chicks.

Bengalese will nest in just about anything and usually raise their own chicks without much difficulty. If foster-raising chicks of more insectivorous finches it may be necessary to get them eating livefood. They should be given a good quality finch mix with the addition of egg food if breeding.

In the United States as the Society Finch, is not a naturally-occurring species, but a fertile hybrid. It is the most domesticated of the “finches” [it is actually a Munia] but its ancestry is the subject of debate. Nobody is quite certain which wild finches the Bengalese is descended from, but the Striated Finch and the White-rumped Munia are thought to have played a considereable role in their development. They are well adapted to captivity and do well in the company of humans. They breed well and are good foster parents for other finch-like species.

It has been found the best “pairing” for fostering is to use two males, this works better than either two females or a male and female pairing. Two males will usually accept eggs, or even partly grown young without any hesitation. It is mostly accepted that these birds have been bred in Japan for some 250 years, and over the years, breeders have managed to breed lots of color variations including fawn, chocolate brown, pied and etc. There is also a very attractive crested variety of the Bengalese. Over the centuries individual color patterns have been developed. For instance, one Japanese family may have developed all white birds with black wings, while another family may breed ginger birds with white heads etc. Development of these strains has taken several generations of the one Japanese family to perfect. These birds are a very close flock species and tend to all roost in the one nest if kept in a group. This tends to make breeding harder in an aviary situation, and they breed better if kept as single pairs in individual breeding boxes [as used for Canaries and Budgies]. This close flocking behavior is also responsible for their American name of “Society Finch”.

They are cheerful little birds that are quite easy to look after. They are also quite easy to breed provided they are, of course, adequately sexed. Obtaining a female-male pair can present a difficulty because both sexes look exactly the same at first glance. However, it is possible to determine gender by behavior since males tend to display to impress and court females. The best way of using this method to sex Bengalese is to place a single bird in a small cage and completely isolate it from its own kind [both sight and hearing] for several hours; then introduce another Bengalese to the cage. If the first bird is a male it will immediately display to the newcomer. Unfortunately this does not necessarily mean the introduced bird is a female. But if the first bird does not display it is almost certainly a hen.

However, a quicker and more sure method of sexing is to compare both the head width [in a line across the top of the head between the eyes], and the shape of the under-side of the beak. The male has a much broader head than the female; and the male’s under-beak [where the beak meets the feathers of the neck] is a “V’ shape and the hen’s more rounded like the bottom of the letter “U”. In both these methods the two birds should be held side by side to compare.

Feeding is simple, as all they require to remain healthy and breed well is a diet of small millet, green-food, grit and fresh water. They will not usually take live-foods, but it has been found they will often accept house fly pupae, which they crack like seed. This is particularly useful if they are being used to foster species that require a high protein component to be successfully reared. (From Wikipedia, the free encyclopedia)

The origin of most color mutations is known. From what we see in the literature, the pied (variegated) mutation is the oldest one. Pied (short for piebald) means that there is color breaking or patches of white interrupting the color of the bird.

The fawn mutation had arisen in Asia a long time ago most likely in a population of pied chocolates. Much more recently, the gray and the ino mutations arose in Europe and even more recently the pearl mutation arose in Japan. Many of these color mutations can be combined along with feather mutations to give dozens of unique combinations.

“Selfs” are solid color birds. The best evidence indicates that these birds are repressed pieds and not wild type birds. They were derived from taking different colored pieds and breeding the least white to the least white to obtain birds with no little or no white at all. Selfs often are “leaky” meaning they throw out white feathers usually under the beak or between the legs.

This site uses Akismet to reduce spam. Learn how your comment data is processed.